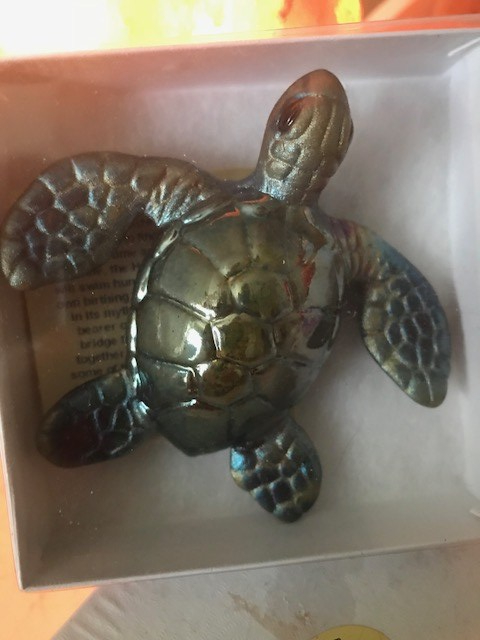 Apparently today is World Turtle Day! I know, it seems like every day celebrates something…

But how can one not like turtles? Turtles have never been my favorite animal, but I remember collecting bracelets that had turtles on them. My family has always loved San Francisco and always finds a reason to visit. When I was young, for a while each time we went to San Francisco for the day, I would get a bracelet from a street vendor. And each bracelet had a turtle on it.

On my most recent trip to Maui, a local speaker shared that turtles, in Hawaiian culture, are believed to be guardian spirits and represent family members. In Hawaiian turtles are called honu and it is also said that they led the Polynesians to the Hawaiian Islands. I guess turtles held an important place in old Hawaiian society  because it was also believed that the turtles were property of the chiefs (Maui Ocean Center)

When I was in Maui I went to the Maui Ocean Center and I learned about turtles. Some interesting facts about the green sea turtle from the center:

-As baby turtles they eat sea jellies, crustaceans, and fish.

-A challenge for baby turtles is making it to the ocean after they are born on the sand. Unfortunately they become prey for many animals! They even fall victims to humans picking them up.

What I think is important to focus on for World Turtle Day is the fact that all sea turtles are listed as endangered.  At the center I was also able to learn about the organization’s work on conservation. For example, the center has a Hawaiian Green Sea Turtle Educational Loan Program.  The center works with the U.S. Fish and Wildlife services to home some sea turtles and release them back into the wild as juveniles. This program is focused on education, conservation, and the enhancement of the public’s awareness of the oceans and its inhabitants. Work like this is very important because turtles, and other species, play a critical role in their ecosystems and the environment as a whole.

In honor of World Turtle Day I made a donation to the World Wildlife Fund to help fight for the sea turtles! I want to keep having World Turtle Day to CELEBRATE turtles and not to remember a world when turtles lived.