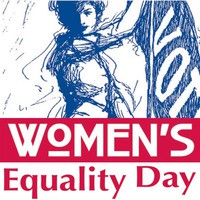 I have mixed feelings about having an Women’s Equality Day.

I’m happy to have a day celebrating women, but the fact that we need a day to remind everyone that women are still not treated equal makes me upset.

If one truly stops and thinks about it, it wasn’t that long ago when women could not vote, could not own property or get a divorce.  Society believed that women were too stupid for certain jobs and could not be left alone while out in public.

Some major bench marks that women have achieved only recently:

But how far have women really come? What does the work force look like now for women?

Of course these data points only show a small picture. For example, women are more likely than men to graduate college by age 29, women make up half of the work force, and the range of occupations that women enter is growing (U.S. Department of Labor)

I don’t share these grim data points to be a “Debbie Downer”. These are facts that women still face obstacles in the workforce.

It has been noted that during performance reviews, women receive less constructive criticism/feed back. If a women shows strong leadership skills, she is called bossy while a man is call a leader. Do people give less constructive feed back and call a woman bossy  because CONSCIOUSLY they want to treat women different? I believe no. These differences take place with many people not realizing what influences them.

A couple of months back I applied for a new position at my work. I ended up NOT getting it and the rumor around the office was that one of the reasons I didn’t get it was because I was AMBITIOUS. Yes, I am an ambitious person. I have told many co workers this. I have even told my boss and the VP of my department. However, how my co workers were describing the rumors about me, ambitious was painted in a bad light. When has being ambitious been a bad thing? Oh, it is only a bad thing when you are a woman. Did my co workers CONSCIOUSLY describe being ambition as a bad thing  because I was a women? Again, I don’t believe so. This is what society has conditioned them to do and believe.

So in 2017 we have a day to honor the fight for Women’s Equality. In 2018, and the years to follow, we will again keep celebrating the day. I hope to see the day where the fight for women’s equality is a thing of the past.